The biggest Irish holiday of the year is coming up in a little less than three weeks.  Even if you are not Irish you most likely know the tradition of St. Patrick’s Day.  The most common adages are not to get caught wearing something that isn’t green along with enjoying certain refreshments that are often green colored and foods that are traditional.

Originally, the color associated with the holiday was blue but eventually green became the color for March 17th as well as the symbol of the shamrock.  Traditionally, St. Patty’s Day started out as just a one day occasion in history but by the 1990’s it had become a three day holiday.  Now in Ireland, the festival of St. Patrick takes on five days and includes parades and other festivities in the towns of Cork, Belfast, Dublin and Downpatrick to name a few.

In order to be prepared for the feast of Saint Patrick, ShanOre has several green and customary bejeweled suggestions to help those looking for expression.  These Stone Set Shamrock Silver Earrings are a perfect pair of earrings to wear throughout the festivities whether going to a parade or other social occasion.  The style is retro which indicates the fun of revelry that inspires the holiday of St. Patrick’s day as well as the shape of the shamrock which St. Patrick used as a symbol in which the holiday was named after him. 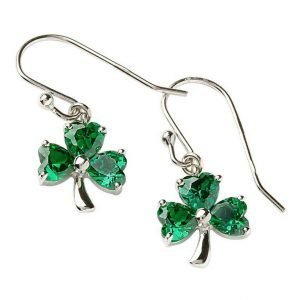 There is also the Silver Shamrock Stone Set Pendant that matches the earrings very nicely.  If one prefers to wear them both as a matching set it would look very nice or they could be worn alternating occasions.  The necklace seen here is sterling silver. 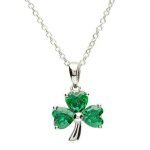 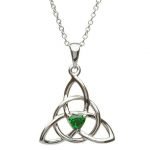 If you are looking for something different than a shamrock but like the idea of a necklace then there are many options to chose from.  We have the Celtic Trinity Silver Stone Set Pendant which contains a heart-shaped stone in green in the center of the necklace.  The trinity symbol is also associated with St. Patrick’s Day although the shamrock became the primary symbol, the trinity symbol can still be interchanged as a symbol for the holiday.

Whatever you plans are for the holiday be sure to find a nice piece of jewelry and do your best to make it is one that contains a part of St. Patrick’s meaning and of course make sure it contains something green and that way your holiday won’t go wrong.