Apparently, Ashford Castle in Mayo is a dream wedding location for many people.  Located in Quiet Man territory, it might be Ireland’s most romantic castle.

If you’re considering a marriage in Mayo, you might want to know a bit more about Ashford Castle, the town of Cong and the surrounding area.  It is not only a dream wedding location, but a perfect base for a honeymoon spent exploring the beautiful Mayo landscape and the wild Atlantic coast.

Ashford Castle itself was built on the shores of Lough Corrib in 1228 by the de Burgo family.  They were an Anglo-Norman family, who had just defeated the local O’Connors and didn’t care much about being seen as gracious winners.  They built other castles, seemingly it was something of a hobby for them, but Ashford is the one that seems to captures the most hearts.  The O’Connors were keen builders too and are responsible for the Augustine abbey in Cong, which is older than Ashford Castle.

Over the following centuries as the castle changed hands, the grounds were expanded to 350 acres and the castle itself underwent many remodels and additions.  It kept getting bigger and better until it caught the eye of film director John Ford, who stayed there while filming The Quiet Man in and around Cong.  The classic film starring Maureen O’Hara and John Wayne showed off the beauty of Mayo for the world to see and put Mayo on the map as a romantic destination.  Twenty years later, Ashford Castle was renovated and doubled in size.  Today, the castle is a top-ranked hotel offering a range of activities from falconry to bicycle tours to gold to kayaking and lake cruises.  And of course, it is an enormously popular wedding venue. 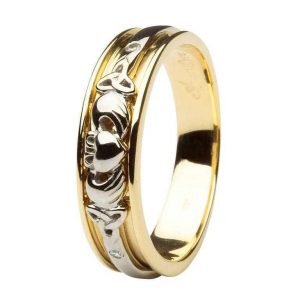 Lovely as it is, Ashford Castle is not the only destination in the area.  Cong boasts the Quiet Man Cottage Museum, and visitors can take guided tours of the locations used in the movie.  Adventurous types (or those who wish to escape their new in-laws) can go caving or pot holing and maybe even glimpse the mysterious fairy trout in Pigeon Hole cave.  Just be aware that in this climate, caves can flood quickly so safety is paramount.  (And remember, sending those new in-laws caving on a rainy day is likely to cause more problems than it solves.)

Diehard romantics will be pleased to know that Cong is near the border to County Galway, which is equally beautiful.  Connemara offers stunning scenery and a treasure trove of craft shops.  A visit to Galway City can include a stop at what remains of the ancient fishing village of the Claddagh, which gives its name to the beloved ring design.  Only a handful of cottages remain, but the spot offers a beautiful view of Galway Bay complete with fishing boats and usually swans.  With all of that, the Galway and Mayo region has quite a claim for the title of the most romantic spot in Ireland.