Home > Blog > Jewelry Education > What Do You Really Know about the Shamrock?

You have no doubt seen it countless times on logos, decorations, tea sets, t-shirts and jewelry.  It’s one of the most enduring and popular symbols of Ireland, and it is everywhere on St. Patrick’s Day, but what do you really know about Ireland’s most famous plant?  The shamrock is synonymous with Ireland, yet it remains a bit mysterious. 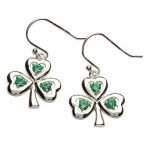 If you have ever tried to get a real shamrock plant, you probably noticed there is a bit of dispute and confusion about what exactly qualifies.  Of course, we know it is not a four leaf clover, and yes, we wish everyone knew this!  But don’t feel too bad if you don’t know much more about what qualifies as shamrock – experts in botany and Irish culture don’t always agree on this!  Wood sorrel, also known as oxalis, is the plant that is universally accepted as shamrock; it features the three heart-shaped leaves – the shape we all recognize in earrings, pendants and other jewelry.

Some will argue that some plants in the clover family are also shamrock, but the leaves are round without the heart-like notch at the end.  Like most Irish people, shamrock can thrive in a variety of climates around the world but find temperatures above 75 degrees Fahrenheit a bit too hot.  If you are interested in growing your own shamrock, you should know the plant is toxic to dogs and cats.

Shamrock has long been associated not only with Ireland generally, but with St. Patrick himself.  Legend has it he used shamrock to explain the three in one nature of the Holy Trinity when he was converting Ireland to Christianity.  Three was already an important number in pre-Christian Irish spirituality, which focused on a triple goddess and used the triple spiral symbol carved in stone at Newgrange, a passage grave in County Meath that is older than the pyramids.  That must have made the job easier. 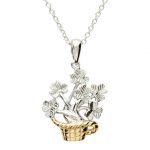 We expect to see the shamrock on all sorts of flags and banners in Ireland, but it appears in other countries too, and not only on St. Patrick’s Day.  It is usually to recognize a connection to Ireland.  For example, the flag of Montreal features a shamrock as well as a fleur de lis, a thistle and a rose.  It’s no surprise that the Irish rugby team and the Irish cricket team use the shamrock on their flags, but the shamrock also appears as a logo for sports teams including Denmark’s Viborg FF and Greece’s Panathinaikos A.O.

Of course, with St. Patrick’s Day around the corner, we’ll be seeing a lot more shamrock.  If you are still debating your selections for the wearing of the green, remember your options go far beyond a green t-shirt that says ‘Kiss Me I’m Irish’.  Two of the nicest and easiest places to wear a shamrock are around your neck as a pendant or as earrings.  Because it is such a widely recognized and loved symbol, you can find almost endless variations on the theme to suit your personal style, whether it is simple and understated or big and bright.