There was a time when women did not have the same rights that they have today. Every year in November for the U.S. and at other times in other countries, the polls open and people over the age of eighteen,( or even sixteen in some countries,) are allowed to vote on key issues and people running for public offices.

Even in our modern times, it is still a surprise how many women don’t go to the polls. If they realized how many women and supporters sacrificed for their right to vote, it might make a difference. It seems that sometimes we need to be reminded.

One such woman who was pivotal to this movement in Ireland was Hannah Sheehy-Skeffington. Hannah was born in County Cork and was the eldest daughter of several girls where she found herself in the midst of a family with strong political beliefs. One impressionable view that she had learned from a young age which would shape her future was seeing her father vote against women’s rights. Despite this environment, Hannah came out swinging and made women’s rights her primary goal. 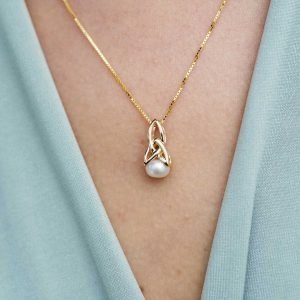 I imagine something like this would have perfectly represented Hannah’s fight and determination. The square pendent symbolizes the strength that it took to endure some terrible ordeals all in the name of equality,(like prison, and famine). The trinity knots in the middle could have represented her undying faith and conviction in her beliefs despite hardships and know what she was doing was worth whatever might come her way. Finally, the diamonds surrounding the pendant could have provided the unflinching protection that she needed to move ahead with her plans despite it all with courage.

She showed her talents from a young age being noted as a very bright student and even learning both French and German. She then moved on to gain both an associate’s degree and a master’s degree taking notice of the colleges that would not allow women to enroll. Hannah was then married to a man who supported her vision so much that he took her last name in a time where such things were unheard of.

It was her pain and fights for equality that mattered most to Ms. Hannah Sheehy-Skeffington and she lived every part of her life in that way until finally women in Ireland were granted the right to vote in 1922. What she had worked so long and hard for had finally come to fruition and now every woman in Ireland could be thankful for Hannah.