Home > Blog > Jewelry Education > The Sound and Symbol of Ireland

The end of the year is a time rich in tradition, and traditional music.  Christmas carols will soon be playing, and while everyone has their own favorites, hearing classic carols on the Celtic harp is always special and beautiful. For many people, nothing says Christmas like the gentle strains of Silent Night or Away in a Manger played on the Irish harp.  The carols blasting at the crowded mall can be torture, but hearing them on the harp can bring the magic back to the classics and restore anyone’s good cheer.

Maybe the Irish harp has such timeless appeal because it has been part of Irish culture since… well… pretty much always!  Scholars have found images of harps on carvings dating back to the eight century.  Harp players were very respected in early Irish society, and traditionally traveled around the island spreading news and music. 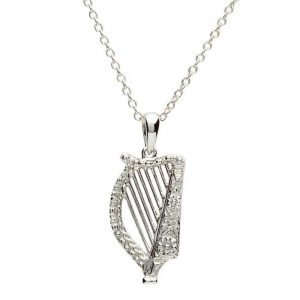 Turlough O’Carolan is widely considered Ireland’s most celebrated composer and harpist.  Born in County Meath in 1670, the son of a blacksmith, he showed an early interest in poetry.  He was blinded by smallpox in his late teens, and then apprenticed to a harpist by his father’s employer.  A few years later, he was given a horse.  With the means to travel, a harp and a tremendous gift, he launched his career as Ireland’s most beloved bard.  He died in 1738, but his tunes have lived on played by musicians from his time to ours.  His music has been recorded by bands including The Chieftains and Planxty and is still played today.

In a season that so easily gets completely hectic and stressful, Christmas harp music speaks to a deeper part of us about what tradition is really all about.  Hearing classic carols on this timeless instrument is a beautiful way to enjoy the peace the season should bring.  And this is also a time to enjoy the beauty of the Celtic harp on everything from Christmas decorations to jewelry. 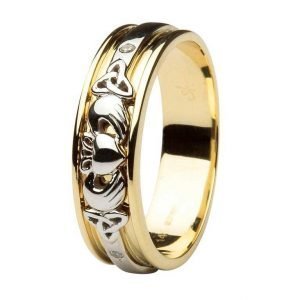 Of course, the holiday season is not the only occasion when harp music steps into the limelight.  The Irish harp is also popular for weddings.  O’Carolan himself played weddings centuries ago.  It adds elegance to the bride’s entrance, the ceremony and the arrival of the wedding party and guests to the reception.  Including a harpist at a wedding is one way to celebrate a new family’s love of Irish culture and heritage.  Claddagh wedding rings are perhaps the most popular way to incorporate Irish culture in a wedding anywhere in the world, but couples can do more such as including harp music, using Irish motifs on the invitations and decorations, and serving a traditional Irish wedding cake.

Whenever and however the music of the Celtic harp is enjoyed, it is sure to evoke images of ancient Ireland.  The harp is a classic symbol of Ireland, used on flags, coins and government documents since the before the founding of the state. Harp music is loved worldwide, and images of the harp are popular on everything from jewelry to Christmas ornaments.