Home > Blog > Irish Culture > Why St. Paddy’s Is a Day for Green

The answers to this question and other popular beliefs that surround St. Paddy follow. Have you ever wondered about this?

There are many common and nearly instinctive thoughts that come with St. Paddy’s Day. We all have our favorite occasion just like any holiday.

As a child growing up, I knew that St. Patrick’s Day was a day most associated with green. I remember seeing green decorations, cards and clothes. I never really questioned why though. As I matured, I learned about Ireland, leprechauns, and pots of gold at the end of rainbows. Many of these things, I came to associate with Ireland and most specifically, St. Patrick.


Whenever I spotted a rainbow, no matter where I was, I tried to find the spot in the landscape that showed wear the colorful beams concluded. I was quite fascinated with rainbows of all kinds, transposing them onto nearly ever piece of artwork that I drew that was depicted outdoors. Once, I even won a weather contest on the local news in my hometown where my picture was featured with, you guessed it, a rainbow. I had somehow managed to include a female in a swimsuit under a waterfall in my weather picture. I distinctly remember an anchor, George Sells, joking with his female sidekick, Donna Britt, asking her if the picture was of her which made her laugh. It was hilarious and then, I gladly accepted my free french fries and t-shirt at the new’s station as a tiny tot.

My little anecdote aside, I’m sure many of us have special memories of how we first learned about St. Patrick and the day when we celebrate it. The thought of parades might be reminiscent for some. Others might think that getting to drink a beer that has been colored green is the best part.  We may not all know the complete story of the saint although, some of us will. All that really takes is being a friend to someone who is deeply Irish to get your facts straight. 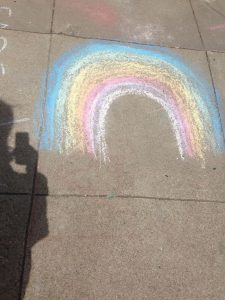 So yes, it helps to learn and associate certain things with this holiday. Why it is a green day has much to do with the color of Ireland and the use on it’s National flag. Other things like eating corned beef and cabbage are actually a way to pay homage to the earliest ancestors of Ireland to the U.S. Normally, they cooked this dish with bacon back home, but it was too costly once they moved, so corned beef was substituted.

The green that I saw everywhere on this holiday started from the belief that St. Paddy’s Day, of all days, was one in which you would be most likely to encounter a fairy or a leprechaun. Maybe, I was even fearful of this as a child. So, in order to keep one safe from these pranksters, it was important to wear green. It then became customary to pinch those who didn’t wear green as a signal to alert them that if they didn’t, they wouldn’t be invisible to the leprechauns and other characters.