The Church Behind the Man - ShanOre Irish Jewlery
Skip to content

Home > Blog > Jewelry Education > The Church Behind the Man

St. Patrick’s Day has come and gone. Now that the revelry is over, where do we look to get a glimpse of his legend?

Without much hesitation, it can become quite clear where our memories of St. Patrick lie. In fact, in the heart of Dublin remains a shining reminder.  This, of course, is St. Patrick’s Cathedral. The church is nearly one thousand years old and not only is this landmark incredibly ancient, it is also the oldest church in Ireland.

The church made it’s mark in the 1100’s when the then archbishop elevated one of the parish churches in Dublin to collegiate status. This did not last for very long because through the years a King demoted the church only to have it restored years later.

It is not hard to believe that during this time the church suffered some physical misfortunes as well. Luckily, wherever the church was in ruins or was lacking, enough work and effort was put back into the structure to replenish it’s virtual beauty and mystique.

One of the most famed recognitions for the cathedral besides being named after the patron saint was that it was once home to Jonathan Swift. He resided as dean of the cathedral for many decades. It was this church where Swift wrote “Gulliver’s Travels.”

The book was an instant success for Swift. His writing was satirical as he followed the exploits of one man who loved to travel. In his adventures, Lemuel Gulliver,  suffers from various adversities such as being shipwrecked and abandoned. What Swift’s novel most revealed, however, was his interjections on the current state of affairs between  European countries and their differing views on the world.

Today this cathedral is restored and hosts many influential events. For current information on events and hours, see St.Patrick’s Cathedral in Dublin.

In conclusion, there are perpetual reminders of St. Patrick everywhere you look if you are looking in the right places. This cathedral is perhaps one that is the closest to Patrick than any others because it was in Ireland where Patrick found his salvation and made such a great impact on the lives of many.

If you are planning a wedding or ceremony at the cathedral, you definitely need the perfect ring to accompany the festivities. This Ladies Celtic Knot Diamond Ring is a beautiful and sparkling reminder of love and light. There are two rows of exquisite diamonds that sit atop the circumference of the band. In the center of the ring  is what looks like a never-ending row of trinity knots. What better way to use this than as a symbol for your love and devotion? 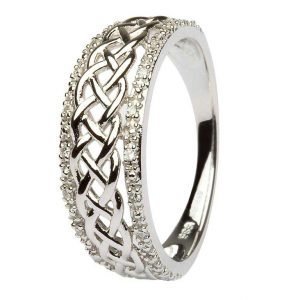