Much is talked about when it comes to St. Patrick. I have mentioned the parades and how much goes into the function of the day, but what gets lost is the simplicity in which the day was founded. This is to say that one man who was just like any ordinary human being was singled out because he had surmounted a very tragic circumstance.

What he did was that he turned his slavery around for the better good of the people of Ireland and the world throughout his missionaries. He began to affect those he met and touched so many that he became a patron saint and therefore things like prayers and his name were brought into worship and the Catholic church. 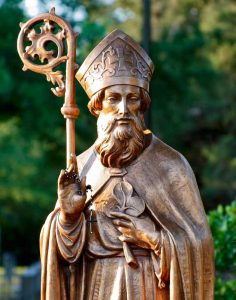 Most people would not understand or even consider this when going about enjoying the holiday of St. Patrick’s Day. They might think it is just about drinking and eating, enjoying parades or kissing other people.  Perhaps they think it is just about pranking others who don’t wear green or maybe they think it’s only about being Irish. I wonder how many people don’t know the true meaning behind St. Patrick’s Day and perhaps this year I hope that for one instance that people will reconsider and truly appreciate who the holiday is responsible for and why.

Regardless, I choose to think that while St. Patrick was held prisoner that his faith was what kept him strong and this is why he chose to turn around and return to a life as a missionary. His choice seemed clear that he felt that because he was eventually freed from slavery that his message was to now devote himself for the common good of mankind. This is how I understand faith, although some people may have different interpretations than mine.

The way that I understand things is that you do not run away from a gift or a blessing. If God has granted you an opportunity than perhaps he wanted you to learn from it in order to help others. I was raised Catholic so this is how I was taught and the way things were explained to me is that God does not put unfortunate things in the paths of his children for no reason unless he has a purpose for them. I think that St. Patrick knew this and therefore used his experience as a calling to help mankind once he was freed from bondage. He knew it was his responsibility or cross to bear to show others through his missionary work with immense grace what it was that he had been through. It was not his choice. He was chosen.

Therefore here is his prayer: