In one of the best examples—cinematic or otherwise—of complexity in the mundane, we have the glorious Meryl Streep as Miranda Priestly in The Devil Wears Prada.

In less than the time it takes to microwave popcorn, Streep’s character marshals together history and perspective into something that deflates pomposity and makes you feel all tingly. It’s a slap down of an ignorant bully, if for just a moment.

“Oooooooh… Okay. I see. You think this has nothing to do with you. Youuuu go to your closet, and you select—I don’t know—that lumpy blue sweater, for instance, because you’re trying to tell the world that you take yourself too seriously to care about what you put on your back but what you don’t know is that sweater is not just blue, it’s not turquoise, it’s not lapis, it’s actually cerulean.

And you’re also blithely unaware of the fact that in 2002, Oscar de la Renta did a collection of cerulean gowns, and then I think it was Yves St. Laurent who showed cerulean military jackets.

(I think we need a jacket here.)

And then cerulean quickly showed up in the collections of eight different designers. And then it filtered down through the department stores and then trickled on down into some tragic Casual Corner where you, no doubt, fished it out of some clearance bin. However, that blue represents millions of dollars and countless jobs. And it’s sort of comical how you think that you’ve made a choice that exempts you from the fashion industry when, in fact, you’re wearing a sweater that was selected for you by the people in this room from a pile of stuff.”

While scenes like this are fun to watch—Who doesn’t enjoy a little schadenfreude?—this scene in particular has staying power for two reasons: It defends fashion by reminding us that it isn’t trivial or stupid; and two, it defends beauty, which in this case, comes in the form of fashion. 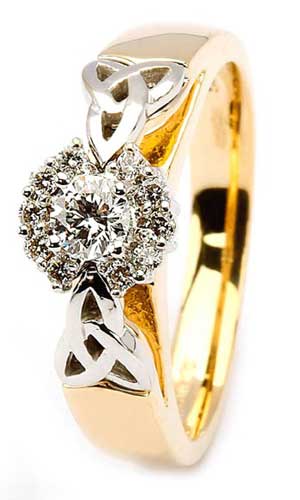 The honeyed 14 karat yellow gold of the Diamond 14K Cluster Celtic Engagement Ring transforms into a backdrop to the cluster and knots, both of which stand in stark contrast by color alone. The choice to inlay the diamonds with Celtic love knots in white gold subtly elevate the knots in importance. And as they should be.

Celtic knots are not just Irish designs. They originated in Roman art but existed within a plane closer to doodle than what they mean today after monks, during the Dark Ages when literacy rates were plummeting, painstakingly adorned the Book of Kells and other manuscripts with them. It’s as if even then, they recognized that divinity cannot exist with word alone.

In Jonathan Lear’s book, A Case for Irony, Lear writes (and Tom Ashbrook reads) about how beauty can stop us long enough to be open to the divine. Or for reflection and meditation, to be still long enough for the examined life:

“‘Plato also talks about the importance of the disruptive, disorienting experience as that from which philosophical activity emerges.’ He thought that beauty was a very disruptive god-sent madness that was useful in breaking out of our routine understandings in order to focus us on more ultimate…transcendent forms. Now I don’t think you need to go along with all of Plato’s metaphysics to think that he got the psychology right.”