When was the last time you had a taste of some hearty stew? Most of us have eaten stew at some point in our lives. Also, families and restaurants offer this meal option quite regularly.  It is in truth, a story worth knowing how the spread of today’s modern stews started in Ireland nearly two hundred years ago and from something particularly devastating.

What is recognized as traditional Irish stew is actually something that was originally regarded as a peasant food. Sheep were a valuable commodity of Irish people for centuries. And because of the need for survival, they made good use of these animals in nearly all aspects.

The sheep’s wool was used for clothing and even furnishings to help keep warm. The milk was used to drink and therefore, they found that the bones and meat of the lamb would provide a crucial basis for nutrition.

Root crops were another treasured source of food for the Irish. These pieces are any crops that grow in the ground by way of roots. Common examples are potatoes, carrots, yams, ginger and radishes.  Irishmen found that adding these vegetables to a slowly simmering pot of stew helped to stretch their cabinets and kitchens. 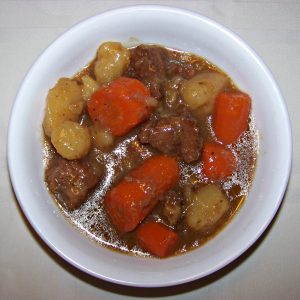 In 1845, the migration of this product got it’s rise. This was a very inopportune time for Ireland because it was the start of the Irish Potato Famine.  It was an incredibly significant event for many reasons.

For instance, by today’s standards, if the potato crop failed our world for several years, people would most likely not starve. If you consider that many of the poorer people in Ireland lived and depended on this inexpensive crop and also acknowledged that they did not have many, if any, alternate options for food, the true ruin of the event would seem apparent. Needless to say, when the potato crop faltered, so did many of the people.

Britain tried to offer support, but their contributions were scanty. During this time, they had control of Ireland. But, because they fell flat in supporting and protecting Ireland appropriately, resentment and a further drive away from them in lieu for independence became a dominant social theme. By the time the famine was complete, nearly one million people in Ireland, mostly poor people, had perished due to starvation or disease related to malnutrition. And in the years during this calamity, nearly two million Irishmen immigrated elsewhere.

Many of these immigrants landed in the U.S. and they brought with them their recipes for traditional lam or mutton stews. Innumerable people adjusted and tailored stew recipes in order to accommodate local goods. That is why today there is often more beef stew available rather than lamb. Even varieties popped up that have a hint of Guinness Stout in them. See here for a classic Irish stew recipe.

The culminating lesson of this event was that it shed light on the needs of all the people, namely the impoverished, and how the failure of one root vegetable could cause major destruction for them. It was clear more needed to be offered to those living below their means because all it took was one misfortune to handicap an entire nation, not to mention impact the history of the world.