Many of us would struggle to come up with much that Irish and Swiss cultures and histories have in common, aside from amazing cakes and a deep fondness for fine chocolate.  The Swiss are synonymous with punctuality, and the Irish, ahem, are not.  The Swiss have the Alps, famous for their breathtaking heights and glorious skiing.  We have puzzled looks from visitors when we refer to the Dublin or Wicklow Mountains.  Yes, yes, everyone agrees they are beautiful, but in some parts of the world not even our highest peak, Mount Carrantuohill at 1,039 m, cuts it.  We have music and stories that make everyone want to be Irish… and forgive us for being late and perhaps exaggerating very slightly now and again.  Like when we talk about mountains.  But if we look back far enough in time, back to the Iron Age, we can see evidence of a connection between Switzerland and Ireland that profoundly influenced art and design here. 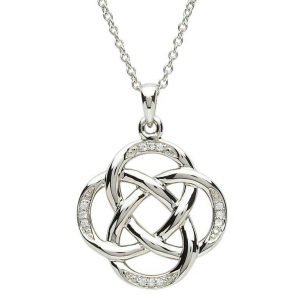 The La Téne culture is named for a lake in Switzerland where a hoard of more than 2,500 artifacts was discovered in the 1850s.  The La Téne influence spread throughout Europe to distant points including Ireland, Hungry and Spain and grew out of the previous Hallstatt culture with Mediterranean influences.  La Téne artifacts discovered around Europe have included shields, swords, parts of chariots, large statues, vases and cauldrons, and of course jewelry.  What ties these items together is not just carbon dating, but their intriguing swirling spiral designs.

One of Ireland’s most underappreciated heritage spots is in County Roscommon.  The La Téne stone outside Castlestrange House near Athleague village features the spiral designs typical of the La Téne culture and of Irish jewelry today.  The better known Turoe Stone in Galway is another example of La Téne influence in Ireland. 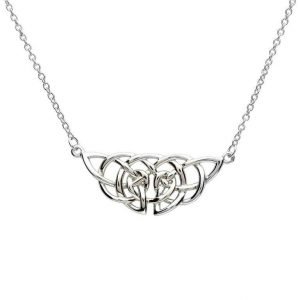 The La Téne finds dating back to the Iron Age are not the only example of spirals used in ancient Celtic stone carvings and jewelry in Ireland, but the way archaeologists have been able to map the spread of this culture throughout Europe is fascinating, and it shows how interconnected we all were through trade and travel at different times throughout the centuries.

The timeless appeal of spiral designs also merits a mention.  Not many styles remain in fashion for centuries after all!  Yet Celtic spiral designs are beloved today as they have been through the ages.  A beautiful spiral pendant not only looks good today, it shows a connection between people that can be traced through Roscommon and Galway to a lakeside in Switzerland and south to Greece, with detours throughout most of Europe.