At no time of year aside from Mother’s Day is the Irish mother more celebrated than at Christmas, and no time does she deserve it more.  Think about it.  She probably started preparing for Christmas shortly after the start of the school year, if not sooner.  If she’s very traditional, her Christmas puddings were ready before Thanksgiving, which is good because she is probably going to cook up a traditional Christmas for the big day as well as enough Christmas cookies to feed everyone in the county.

Of course, not all Irish mothers embrace cooking.  But they do work hard to ensure their children’s happiness all year, even if said children feel mother works a little too hard in the advice about their lives department.  She only wants what is best for you, as you know because she has mentioned it once or twice.  Irish mothers traditionally go so overboard making Christmas special for everyone that they have their own day in January – Nollig na Mna, aka Women’s Christmas – where tradition holds they get to relax while the men in the family look after the cooking and cleaning. (That means the dinner dishes too, lads.  You get no credit if she wakes up to messy kitchen the next day!) 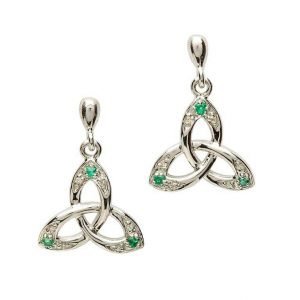 So of course, picking a gift for an Irish mother is no easy task.  Let’s rule out a few things right now.  If you are thinking of tea towels, stop now.  This idea is downright dangerous unless you include a note announcing you will be doing the dishes for the next year.  Of course mother loves a cuppa tea.  But let’s be realistic.  That teapot in the cupboard she’s been using since before you were born?  They don’t make teapots like that anymore.   You don’t honestly think you could actually select a better one, do you?  No, you cannot, unless mother has pointed out a superior one herself.  Mothers are entirely capable of picking out the practical items they need, and they’ll find them at a better price than you would anyway.  Get your mind out of the kitchen. 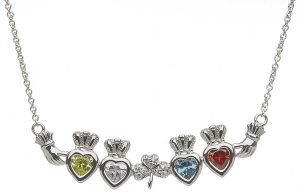 In your mother’s eyes, you are a jewel (no matter what the ejit you used to date said).  You sparkle.  You brighten her life, aside from those moments when you are hiding from her.  That’s right.  Jewelry.  Most Irish mothers are reluctant to indulge themselves, and jewelry from their children is rich in sentimental value.  If you want to do something big with a group of siblings, something that cannot go wrong, consider the mother’s family pendants Shanore now supplies.  Both the trinity and shamrock styles feature the children’s birthstones in a Claddagh design setting.  They are also a hit with grandmas who will love wearing their grandchildren’s birthstones as much as they love showing off their cute photos.

The mother’s family pendants are not the only option for moms who really are treasures themselves.  Maybe your mom has a love of earrings or a passion for pendants.  Whatever her tastes, you can find jewelry to match that also celebrates her love of Ireland.