Complex and beautiful designs with deep meaning make Celtic Knotwork one of the most widespread ancient symbols. Celtic Knot designs are present in jewelry, tattoos, house decor items, and spread in the Irish landscape and history books.

Celtic knots consist of intertwining lines crossing in never-ending patterns, and in general, they mean eternity. However, there are eight types of knots, and each holds a different meaning.

One of the most remarkable traits of Celtic Knots is that they have no end or beginning. And over the years, some of these designs have become more popular than others. You surely have heard of the Trinity Knot and its significance for love and faith. However, there is another variation that became famous for its love significance.

The Celtic love knot consists of two interweaving hearts, symbolizing the love between two people. It is a beautiful symbol, and Celts used the emblem to celebrate their love. They exchange knots in the same way couples use rings today.

The Origin of the Celtic Love Knot 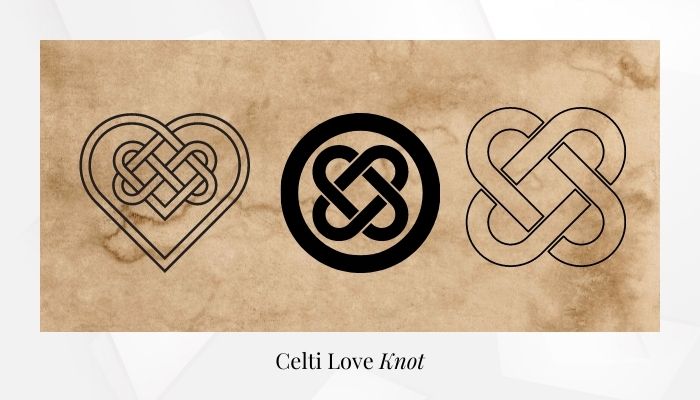 Celtic knots are unbroken loops interlaced around each other. Its most remarkable trait is that it shows no beginning or end. The motif represents faith, eternity, and the love between two people.

Pre-Christian symbols would generally include spiral patterns. On the other hand, post-Christian designs include looping, braiding, and knotting Celtic designs. These designs were included in manuscripts to decorate and illustrate life events. The famous Book of Kells, for example, contains various examples of Celtic Knots.

The Celtic Love Knot pattern we see today evolved from the first interlaced designs found in Celtic History. Reading through history books, we find the appearance of the first interlace patterns divided between pre and post-Christian.

The Celtic Love Knot design and its meaning 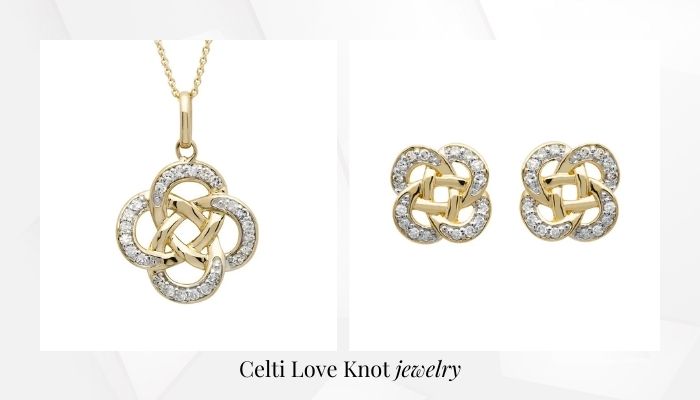 The Celtic Love is a modern version of the traditional Celtic knot, and similarly, it features infinity patterns. The design displays a heart created by the intertwining lines of two Celtic knots. It creates a structure that looks like two hearts interlocked.

The Celtic Love Knot symbolizes everlasting love between two people. Also known as Anam Cara Knot, which translates as a soul friend, this knot has both religious and spiritual meanings. The word Anam Cara derives from the Irish language. It is a famous romantic expression present in books and even used by St. Brigid of Kildare.

Related: The Rich Meaning and Symbolism of The Irish Celtic Cross

People believe Celts exchanged these knots just like couples do with rings today. Therefore, today it is common to find these designs in Celtic wedding rings, representing the eternal bond between two people. In addition, people use it in jewelry, tattoos, logos, and embroidery to symbolize eternal love.

Apart from the romantic meaning, it also represents the never-ending cycles of life. It also depicts the spiritual meaning of life. Apart from its universal symbolism, the shape that houses a Celtic Love knot gives extra meaning to the symbol. 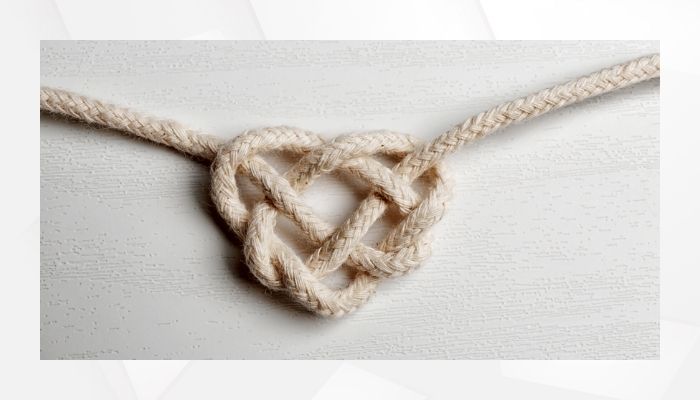 Celtic Oval Love Knot: also known as the Spiral Love Knot, is one of the oldest styles of Love knot designs. It represents eternal life.

Celtic Four Love Knot: it features four interweaving circles. Each circle depicts the four seasons of the year. The twin lines on the margins represent a couple’s love.

Celtic Square Love Knot: it has a single line that moves along a square shape. It symbolizes loyalty and therefore is commonly present in wedding ring design. 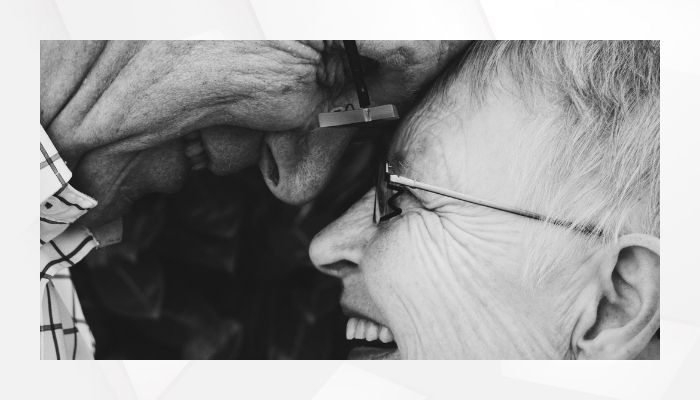 Celtic artwork mainly consists of geometrical shapes like spirals, key patterns, and step patterns. Scholars suggest early Celtic pagan religions did not allow the use of animals, plants, and humans in their artwork. They believed those were creations of their God and should not be replicated. That could be one of the reasons most Celtic art exhibits geometrical shapes.

Christian Celtic artwork has strong influences from pagan designs. However, the famous Knotwork we see today is only present in Christian Knotworks. Similarly, Christians introduced “forbidden” elements, such as plants, humans, and animals figures to their designs.

There are many legends surrounding the Celtic Love knot. The most popular supposes that if a couple ties the love knot on a tree and the knot stays in place for a year, they’ll have a strong relationship, and their love will last forever.

Related: Learn how to make a lovely Celtic love knot!

To Sum it Up

Despite its first appearance during The Roman Empire, knot patterns are present in various ancient cultures. In Irish Celtic history, these designs became an integral part of pagan cultures that once lived in the country.

Knots became a remarkable Celtic style and are present in old manuscripts, sculptures, churches, and historical Irish materials. So much so that the knots are one of the most identifiable Celtic symbols. You can take the Trinity Knot or Triquetra as an example.

In recent years, people became more connected to their origins and Celtic culture. Similarly, they began to seek more meaningful things. As a result, these intricate symbols became more and more popular.

Today, the Celtic Love Knot still has the same romantic meaning as it had for the Celts. However, its usage evolved, and today they are commonly found in Irish symbolic jewelry and tattoo designs.