The Celtic Cross is an essential part of the vibrant Irish heritage, as such that it is synonymous with the Irish faith and is spread across the country, mixing with its breathtaking landscapes.

According to Irish literature and history books, the Irish Celtic Cross first emerged around the 7th century and was later popularized by St. Patrick.

Although commonly identified as Irish, the symbol is an integral part of European history and part of the Welsh, Scottish and British Cultures. Several references to this magnificent motif are present in various public memorials, old scriptures, and texts dating back to the early middle ages. Additionally, this captivating Cross lives engraved in stone in decorative arts and jewelry.

Let’s dive into the history of the Celtic Cross to know more about its meaning and origins.

What is a Celtic Cross?

A Celtic Cross is a type of Christan Cross that features a circular ring around the axis of the symbol. The Irish Celtic Cross has four distinguishing features; the base, the shaft, the cap, and the head. Equally remarkable is the intricate Celtic design often present in the Cross’s main panel, ring, intersection, and arms. 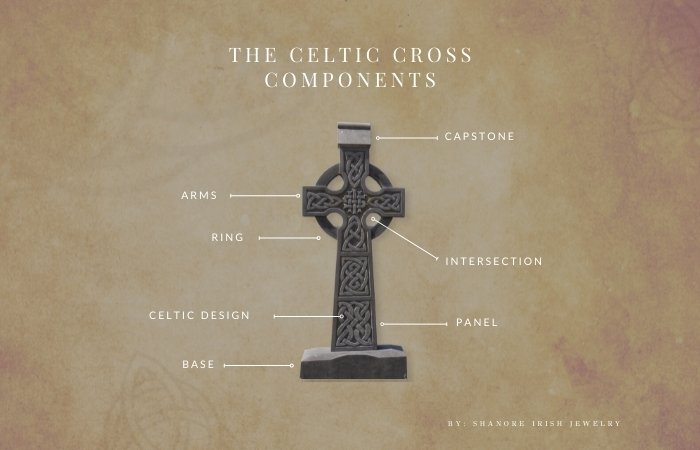 What is the meaning of the Celtic Cross?

Like many Celtic symbols, the Celtic Cross has different meanings and symbolism attached to it. For some, the symbol meaning comes from the ring around the arms and base of the Cross, and the idea is that the circle offers support and strength to the Cross.

Others believe that the ring represents continuity and eternity. Different suggestions indicate that it also represents the spiritual realm, while others believe it symbolizes the Celtic Shield. 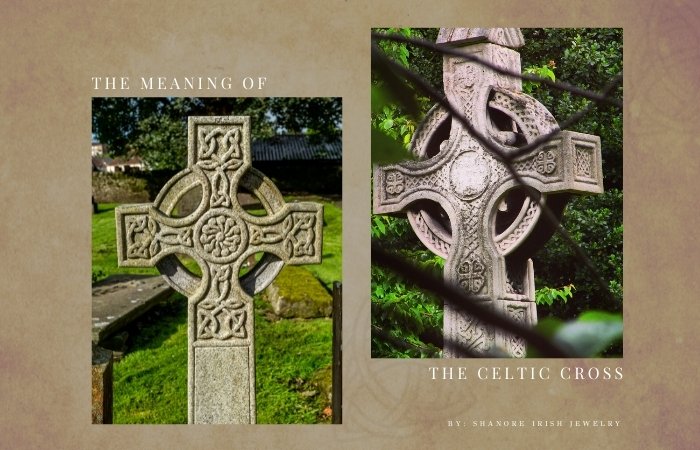 In summary, the Celtic Cross represents the human desire to discover and experience the mystery of life, and it also symbolizes a compass guiding us through our spiritual journey.

A Celtic Cross is not only a beautiful representation of faith, and it is also a true reflection of the hope the Celts had. Similarly, it represents knowledge, strength, compassion, and infinite love.

Origins of the Celtic Cross

The Celtic Cross has been a symbol of Irish culture and faith for over 15000 years. Though the true origin of the Celtic Cross remains unknown, experts have come up with diverse theories about its advent.

Two of the most known theories in Ireland explain how St. Patrick used common Druid and Pagans symbols to try converting the Irish into Christianity.

The Celtic Cross and The Druids

According to one legend, Saint Patrick first formed the Celtic Cross. He was a missionary who arrived in Ireland to spread the faith of Christianity among the Druid population.

The Druids used to worship monumental circular stones as a symbol of eternity. According to legends, when St Patrick understood the significance of those stones, he drew a cross on top of the circular stone to bless it. Thus originated the Celtic Cross, a symbol of combining two faiths; the Cross represents Christianity, and the circle represents eternity, having no beginning and no end. 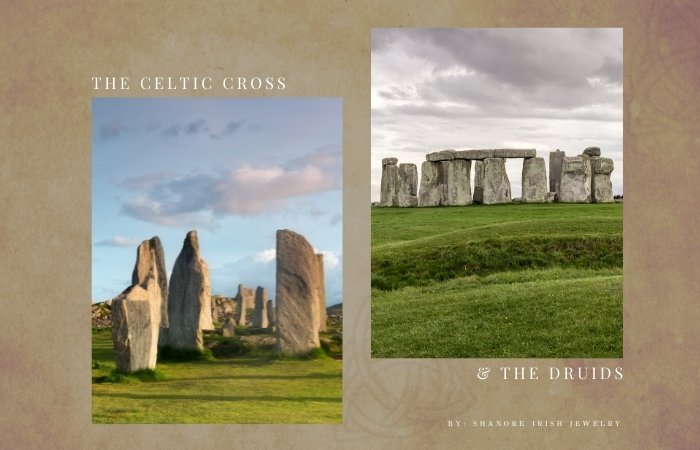 Similarly, during the early middle ages, the Druids adored various divinities. One among them was the God of Thunder, also named Taranis or Taranus. According to Celtic Mythology, this God used to hold a thunderbolt in one hand and a wheel in the other.

During the Bronze Age, this wheel was often described as having four spokes and was usually offered at shrines, worn as jewelry, and even engraved in Celtic coins. However, some believe this four-spoked wheel, often identified as the Sun Cross, might over time have evolved into the Celtic Cross we know today.

Though an ancient symbol, the Celtic Cross is still a very popular motif in modern years. Numerous people around the world still wear it as an expression of their faith or Irish heritage.

The Pagan Roots of the Celtic Cross

Some believe the Celtic Cross might also have a Pagan origin. It could have emerged from the Pagan culture when St. Patrick attempted to catechize the Pagan population of Ireland to Christianity.

According to this theory, Saint Patrick merged the Pagan Sun Circle, a symbol representing the Sun God, to the Christin cross, creating the Celtic Cross. He believed that using a familiar representation would make the analogy to Christianity easier to grasp, and therefore the transition to a new faith would be easier for the pagans. 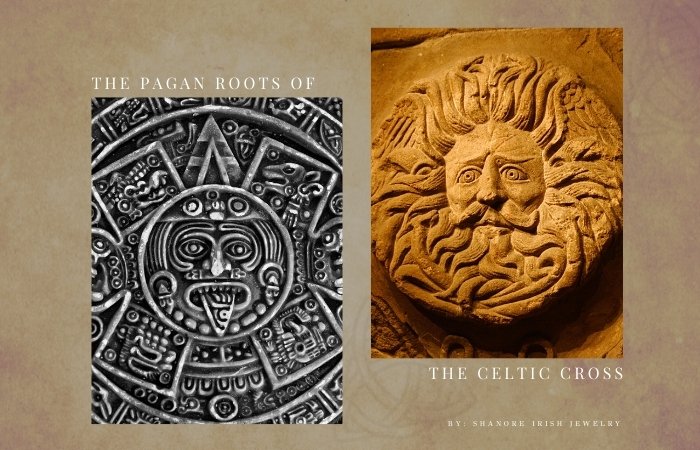 When the Cross became popularized among pagans culture, they started incorporating other Celtic symbols into the crosses. To the point that the Celtic Pagans often included Celtic Trinity Knot designs, representing the Celtic Triple goddesses (as a protective symbol) along with the Celtic Cross in their jewelry.

The Celtic Cross has been a source of inspiration for Celtic art for centuries. Though an ancient Christian Symbol, the modern style of art has not excluded the Celtic Cross. It has taken an influential place in Early Christian Insular art and Celtic Revival literature.

You can find it illustrated in several old Gaelic manuscripts and public monuments. The Celtic Cross is present in the Irish High Crosses erected around the countryside and cemeteries. It is also worn as jewelry by people worldwide as an appreciation of their Irish heritage.

The theories behind this ancient symbol suggest that St. Patrick has a powerful influence on the design and creation of the emblem. His idea of combining the Christian cross with pagan symbols has created a motif that is important to Irish Culture. 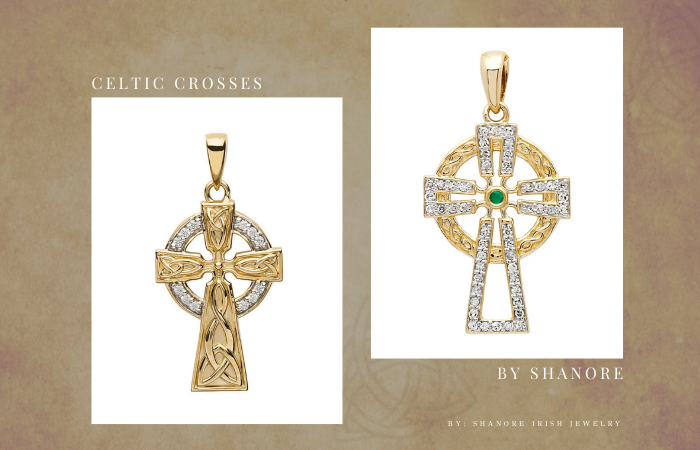