Home > Blog > Jewelry Education > The Season for Silver and Gold 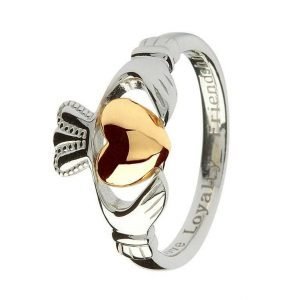 It’s a bit early to put up those beloved silver and gold Christmas decorations, but not too early to start thinking about your own gift list.  You can be sure Santa is in full swing with his.  Children can be fickle about toys, so no rush there, but if there is a special someone in your life and you are hoping to strike just the right romantic note, silver Irish jewelry is perfect for the Christmases before (and after) gold rings are exchanged.

Giving your sweetheart a ring can be complicated.  If it isn’t an engagement ring, you don’t want it to be mistaken for one.  That goes beyond awkward!  While you can find stunning Claddagh engagement rings and gold Claddagh wedding rings, a classic silver Claddagh manages to be romantic without creating confusion.  In fact, the design was created to symbolize a man’s love for the woman he had been tragically separated from but never forgot.  The love story behind the ring’s design is legendary.

Richard Joyce was a fisherman in Galway, and he was madly in love with a local lady whose name has been lost to time.  One day when he was out on his boat, he was captured by pirates and sold into slavery.  His master was a silver smith, and Joyce learned the art of making jewelry.  While there, he created the design we now call the Claddagh to reflect his love for the woman in Galway he pined for during his time in servitude.  The heart symbolizes love, and the hands are for friendship.  The crown represents faithfulness. 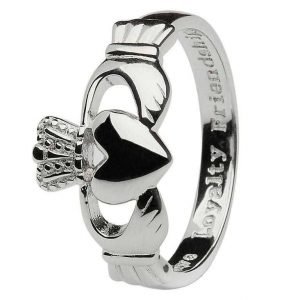 Joyce eventually earned his freedom after years in servitude, and managed to return to Galway with the ring he had crafted for his beloved.  Imagine how he must have felt returning with no idea if she was still living there, if she had given up on him and married another!  But this love story has a happy ending.  The lady was as devoted to Joyce as he was to her, and he gave her his ring.  Eventually they wed, and as far as we know lived happily ever after in the wee Galway fishing village known as The Claddagh. 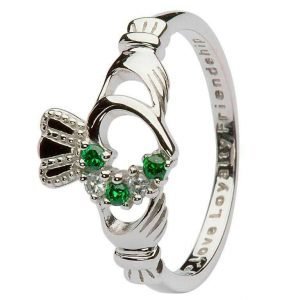 A silver Claddagh ring is a simple classic, but of course, it isn’t the only option.  You can find variations with sparkling stones or even a silver and gold version with a heart of gold.  Claddagh rings have a very romantic history, but they are also popular gifts for anyone who appreciates Irish culture whether or not it is a romantic partner.  The right Claddagh ring is a beautiful gift for anyone you love – a sweetheart, a spouse, a friend or a child.  It celebrates love, friendship and loyalty – the hallmarks of any good relationship and the values held close in Irish culture.