Theach Mhucrois is the Irish name for Muckross House which is a Tudor-style mansion situated near Killarney, Ireland.

It was built in the 19th century for Henry Arthur Herbert and his wife Mary Balfour Herbert. Henry was an affluent politician in the British Parliament. He was Anglo-Irish which put him in a very favorable social position during the 19th century. This social class had primary control over much of the Irish businesses and they also belonged to the Anglican church in England. Mary was a talented painter specializing in watercolors. 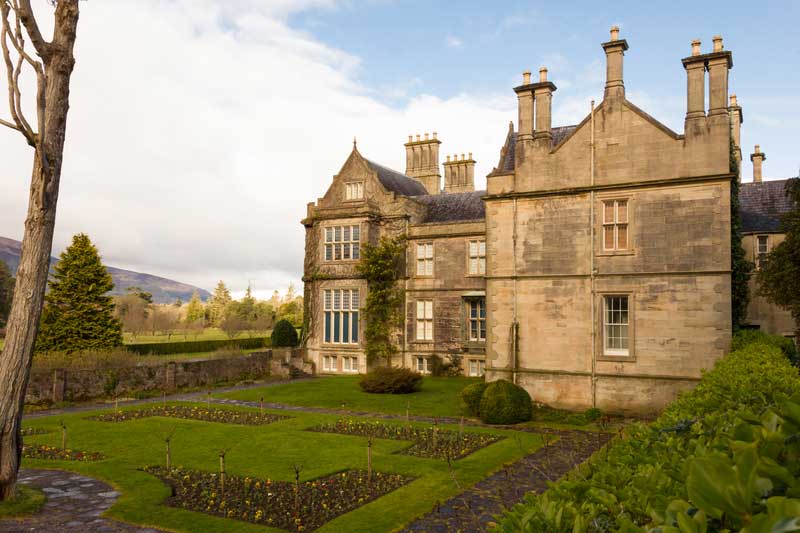 Mary was born in Scotland and she met Henry in Rome. After their marriage and with the help of a dowry that Mary brought to their union which equaled close to 3 million dollars by today’s standards, the couple started construction on Muckross mansion. They then traveled extensively and had four children while living abroad. Mary’s talents were quite noticeable and she kept her painting up throughout her life. When Henry passed away, he was laid to rest in a vault near Muckross. After his death, Mary moved to England and Italy where she continued living her life for her children, painting and her friends until her death where she was laid to rest next to her husband.

The architect chosen to design their home was William Burn. Burn was the Scottish talent who used his knowledge of Scottish Baronial architecture to design and build multiple masterpieces throughout his lifetime. It was revived during the time of Muckross’ beginnings and also at the same time as Gothic revival. It remained en vogue until the early 20th century,

It can be safe to assume that Muckross got some rub off from Burn’s education and style. The Baronial style often incorporated more lofty elements that were commonly seen on fortresses and great buildings of the past such as towers, turrets and bartizans. Muckross does not feature any of these offerings however, it does have the same style with long, tall and majestic, almost castle-like walls on the outside.

The Tudor representations are very noticeable indeed with the tall, towering chimneys, high pitched roofs, and many mullioned windows that align the front face of the building.
The mansion has sixty-five rooms and underwent renovations for the Queen’s visit shortly after it was built.

The home had been enjoyed by the Herberts until their passings and had been sold to a few other families within the century after it’s conception. Muckross was eventually given to Ireland and became the first national park ever in Ireland. Today Muckross is now situated in Killarney National Park and can be viewed by visitors. It includes the house and gardens, a farm, a restaurant and a craft shop.

For more information on Muckross, please see this link here.