Unlike in America, a traditional Irish Christmas typically lasts for about two weeks whereas ours is much longer. There are many traditions carried on in Ireland that signify what is believed to be a customary Christmas. Some are the same in America, however, some are uniquely different.

Midnight mass is extremely popular in Ireland and it is as well in some parts of America. I commonly went to midnight mass growing up in Louisiana and like in Ireland it was usually crowded and my family and I typically had to get to church an hour beforehand just to make sure we had a seat. There was also a choir at my church and the same came be said for many traditional Irish churches although I imagine they might be bigger then the one I was accustomed to. 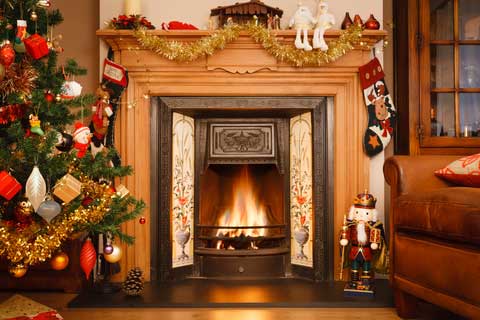 Ireland has the Wren Boy Procession based on an actual plot in which an Irish village planned to ambush a group of soldiers, but before they could attack a flock of wrens woke the soldiers up by pecking on their drums. The custom took off by townspeople dressing up in old clothes, painting their faces black and then carrying a large pole with either a dead wren or a holly bush on it and proceeding from door to door. Nowadays, the procession consists mainly of caroling without all of the original effects in order to keep the basic idea of the Wren Boy story.

There are several basic and standard rules of thumb when decorating your house in a traditionally Irish sense. First is to note the timing in which to put your décor up which would be on December eighth otherwise known as the Feast of the Immaculate Conception. The supplies you would need are a wreath of holly for your front door and several candles to be displayed in your windows. The candle is significant in that it is usually lit on Christmas Eve and is done so in an effort to welcome Mary and Joseph as they look for shelter on the night before Christmas. A few other notes were that the youngest family member were to light the candle and only a girl named Mary could blow it out. During Penal Times priests needed a safe place to perform masses, so the light in the window also served as an indicator of a friendly place in a time of peril.

Rather than leaving milk and cookies for Santa Claus the Irish have a tradition called the Laden Table which they will use the dinner table after they have eaten and place a bread loaf with caraway seeds and raisins, a large pitcher of milk and a large lit candle on the table. The family would then leave the door unlocked so that Mary, Joseph or any other wandering traveler could partake in the morsels on the night before Christmas.

Lastly, after all is said and done the Irish have Women’s Christmas otherwise known as Nollaig na mBean in Irish or Little Christmas. This occurs on January sixth when it is understood that women get the day off and relax while the men are known to do the housework, cooking and take down all of the decorations that the families have spent so much time putting up in the weeks beforehand.

Whatever your Christmas traditions are it would not hurt to try something a little different and incorporate a little bit of Irish into your holidays whether this season or next year whether in the United States or abroad.