Wedding bands are highly personalized pieces picked by those who purchase them. We here at Shanore have created several bands with the triquetra, or trinity knot, already etched somewhere on the band. This means that in addition to whichever stone and metal you pick, you will also have another distinct element embedded in the ring you choose. However, it’s meaning is quite powerful.

When someone purchases a wedding ring with a triquetra on the band it is highly significant and indicative of how they feel about their future spouse and the relationship in which they are about to enter. The triquetra comes from a certain art movement known as insular art. What this means is that during this time in Ireland and Great Britain artists were creating pieces that were specific to Christianity. Their work had an emphasis on religion so that the pieces and designs that they created during this time represented the ways of the world around them.

For instance, items were cloaked in heavy golds and thick lines. There was also a use of a combination of shapes whether they were crosses filled in deep crimson and outlined in a precious metal or otherwise. This is where we developed the triqueta in history. It’s definition was simply that of an ornate triangle originally, but because of it how it evolved it’s meaning and what it came to represent signified something truly crucial to those who used it in their art pieces which included jewelry.

It’s structure is what is known as vesica piscis which is where separate shapes overlap one another and seem to leave an empty space or shape in their middle space. This shape has been used countless times in sophisticated architecture because of it’s sleek appearance. The triquetra completes this look.

Take a look at this ladies diamond set comfort fit wedding ring. This comfort fit ring is a perfect example of how beautifully the triquetra looks in a ring design. In the center of this ring, the rows of trinity knots just appear to go on endlessly in such harmony. This is what makes the triquetra such a beautiful addition to any wedding band. The element of the triquetra itself only adds to a ring and doesn’t diminish from it’s brilliance. This ring also has several diamonds in it and is set with two toned metals in both white and yellow gold. 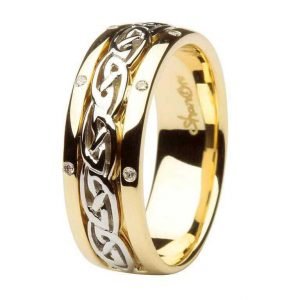 If you chose to incorporate this important symbol into your wedding band than it is likely you already know that you are mixing Irish history into your marriage. The trinity knot signifies a deep connection with the culture and heritage of all things Celtic and a respect for it. It is also worth noting that those who chose rings of this nature are looking for a connection to their faith as it is known that the triquetra symbolizes the Father, the Son and the Holy Spirit.