The dark and dreary days of winter are about to start stretching to longer, brighter days.  The winter solstice is on December 21st this year, and in Ireland this has been a very big deal since ancient times.  Newgrange is a must-see megalithic site in County Meath, Ireland all year long, but the winter solstice is when it shines.  The full and exact use of this astonishing and elaborate passage grave remains mysterious.  Those megalithic folks were not big on recording their traditions in ways that have survived the centuries.  But one thing is very clear – Newgrange was designed to celebrate the winter solstice, which is the shortest day of the year.  For 17 minutes on that day every year, the sun hits an opening above the entrance in such a way that light slowly illuminates the length of the dark chamber when the sun rises.  Of course, this being Ireland, the sun does not always cooperate, but when it does, it is so spectacular that the authorities have to control the number of people who want to be there with a lottery system to prevent mayhem. 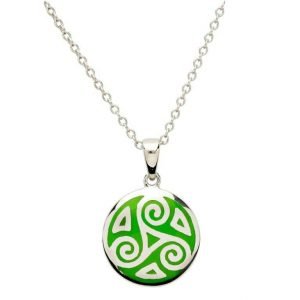 Access to the site is controlled throughout the year now, although once upon a time visitors were scare enough that they were allowed to stroll around without a guide.  Now the site includes an excellent visitors’ center to educate visitors about what is known about Newgrange and the other two passage graves on the site – Dowth and Knowth.  The complex predates Stonehenge and even the pyramids in Egypt.  It is genuinely a masterpiece of engineering.  Both the interior and the keystones of the exterior are decorated with elaborate carved designs, including a distinctive triple spiral.  Spiral design replicating and inspired by Newgrange have become hugely popular for everything from Irish jewelry to kitchenware.  Many believe that these designs originally had some meaning, but now we can only guess what it was.

While Newgrange, Dowth and Knowth are known to be passage tombs, it seems that they had other uses which are less clear.  Cremations were apparently carried out there, although some of remains discovered had not been cremated.  Clearly, the ancient people believed the winter solstice was a very important event worth marking. 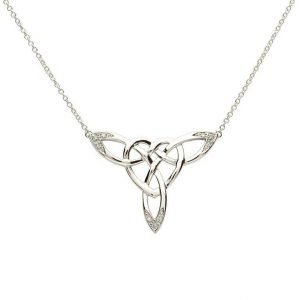 Very few of us are lucky enough to actually see the glorious sun shining on the intricate carvings deep inside Newgrange, but no matter.  We can still celebrate the slow return of the sun with beautiful Celtic artwork, even sparkling Celtic artwork.  A flowing spiral or a sparkling diamond can reflect a connection to those mysterious ancestors who without so much as a calculator (never mind computer aided design software) devised this ancient structure to perfectly capture the sun’s rise on the shortest day of the year and to endure through the centuries.  And a nice pendant can go with you wherever you go, unlike a massive stone and earth megalithic structure.