On 22 May, Ireland will be voting on whether or not to pass the Marriage Referendum, which would become the thirty-fourth amendment to the Irish Constitution.  So, what exactly would this amendment do?

If the referendum passes, it will be a huge victory in the fight for LGBTQ equality in Ireland.  It would have a similar effect as the U.S. Supreme Court’s 2013 decision to strike down section 3 of the Federal Defense of Marriage Act, which previously stated that marriage is between a man and a woman.  The change allowed all married couples, gay and straight, to receive federal benefits.  But, since America has to be super complicated, whether or not you’re a “married” couple still depends on if you live in a state that recognizes gay marriage or not.  The passing of the referendum in Ireland would cover both issues; basically it’s just letting people of opposite or same sex get married (and legally call it marriage) and then giving those married couples equal rights and recognition in the Constitution.

It’s hard to tell which way the vote will go.  People, especially the Irish coming from a historically staunch Christian tradition, are reluctant to change.  Three (Catholic, Presbyterian, and Methodist) of the four main churches in Ireland have maintained that they advocate voting against the referendum, and the Church of Ireland decided not to take a stance.   However, a March poll in the Irish Times found that 74% of the Irish people would vote yes, and there seems to be lots of support even on American social media surrounding moving videos and large-scale art projects. 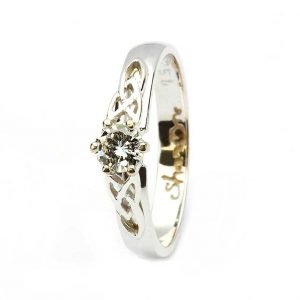 Celebrate your love for your partner and love for Ireland with a Celtic wedding ring.  Learn more about the symbolism here.