Home > Blog > News > What Would President Trump Do?

Presidential elections are only a year away in the United States, and it looks like it could be a very long, very tense year for the estimated 50,000 Irish in America without authorization.

Republican candidate Donald Trump has made his anti-immigration stance a central part of his campaign, and his comments about immigrants, particularly Mexicans, have left many gobsmacked.  He has announced that if elected, he will have a wall built along the US Mexico border and send the bill to Mexico.

Trump’s website page outlining his proposed immigration policies makes no mention of a wall along the US Canada border or any type of barrier in the Atlantic or Pacific Ocean.  Surely he is aware that Mexico is not the only point of entry to the USA?

What exactly does he plan to do to save America from immigrants from other places, including Ireland?  One of his ideas is to end the J1 summer work visa scheme, which has allowed young people from Ireland and other countries to work legally in the USA during the summer while fostering cultural exchange and promoting international good will.  He also wants to change the law that grants automatic US citizenship to anyone born in the USA.  (Irish voters did the same thing in 2004, but if Trump has his way, we might be in for a re-think once we see the other side of it.)

Is There a Little Gold Loophole?

In Ireland, you don’t have to know many people to know someone with an undocumented friend or relative in the US.  The stories are told quietly about the loved ones missing a family funeral or wedding because leaving the US means they probably cannot return.  The legal changes promoted by Trump would cause hardship to the Irish in America, both documented and undocumented. Aside from the difficulties of daily life as an immigrant, his rhetoric is fanning the flames of xenophobia and intensifying an atmosphere of suspicion and hostility toward all immigrants.

But once upon a time, Trump had a very different reputation when it came to immigrants.  When Trump first caught the public eye, he was married to the very glamorous Ivana Trump.  Ivana emigrated from communist Czechoslovakia and did not become a US citizen until she married Donald.  Trump is now married to his third wife Slovenian-born Melania, another immigrant who retained her original citizenship until her marriage with Donald.

Trump himself is the son of an immigrant.  His mother Mary came from Scotland, and according to Trump himself, she remained very devoted to the Queen, which arguably does not sound very American.  His father was the son of immigrants from Germany, and one must wonder what they would make of his wall-building plans given the failure of the Berlin Wall. 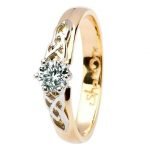 It does beg the question of what would happen if someone dug up some Irish connection to Donald Trump.  Would aspiring immigrants to the US have to prove a relative in common or would they be stuck having to marry Trump to immigrate?