You might think water wouldn’t be anything special in a country famous for how much it rains, but not all water is equal.  Some is potable, some isn’t – and some is holy.  Catholic churches worldwide have holy water fonts, but Ireland takes it a step further.  We have holy wells.  Used not just for blessings but for cures and pilgrimages, Ireland’s holy wells are found throughout the country.  They are dedicated to different saints and known for different cures, but they are all beloved by locals, whether or not they believe in their divine powers.

Many tourists probably pass by more holy wells than they visit without knowing it.  Ireland can boast of having more than 3,000 holy wells, most them a bit off the beaten track.  Holy wells are usually humble affairs siting modestly in a field, although some are better marked and more decorated than others.  Some are known tourist spots such as the one in Fore, County Westmeath and others are known only to locals.  But whether they are scenic and popular or modest and lonely, they are all associated with specific saints who are credited with creating them or somehow claiming them from older pagan traditions as well as specific cures.

Dublin has a few holy wells, including a dry one in St. Anne’s Park in Raheny and St. Colmcille’s holy well in Knocklyon.  In County Fermanagh, there is a village named Holywell outside of Belcoo that is named for St. Patrick’s holy well, a large well where annual devotions still take place.  While the St. Brigid’s Cross might be the most widely recognized symbol of this very busy saint, she left a trail of holy wells in her wake that now bear her name.  One of most well-known is in Liscannor, County Clare not far from the Cliffs of Moher.  While some holy wells are easy to spot because of shrines near them, a good marker to find lesser known ones is a rag tree.  This is not a particular type of tree; it refers to the custom of tying a piece of rag to the tree to represent one’s prayer.  Coins have also long been pushed into the bark of rag trees.  Today, you can find everything from bits of food wrappers to children’s toys left tied in the branches of rag trees. 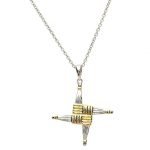 Research has been done on Irish holy wells and there is a scientifically valid reason for their curative powers – but we’d still recommend seeing a doctor rather than splashing on some holy water.  Wells purported to heal weak children tended to have more iron in the water, according to National Geographic magazine, while those used for people with skin problems generally have a high sulfur content.

Whether you are interested in holy wells for their spiritual, medicinal, folkloric or scenic properties, you can find them in whatever part of Ireland you are visiting.  If you can’t find them in a guidebook or website, ask at the local tourist office or a church.  Some are sign-posted, many are not.  If they are on private property, it is important to seek the owner’s permission.  For all of their many qualities, holy wells offer no protection against angry farmers, snarling dogs or charging bulls.