Home > Blog > Irish Culture > Who was St. Brigid, and what’s her importance for the Irish?

Today, here in Ireland, we celebrate St. Brigid’s Day. Brigid, or Bríd in Modern Irish, was an iconic woman and one of the greatest heroines in Irish history. However, not many people know who she was or why the Irish have a day dedicated to her.

Saint Brigid’s Day celebration originates from the Celtic festival of Imbolc, which marked the beginning of the Spring and the end of the cold and dark winter days in Ireland. Irish ancestors celebrated the date with a special supper and custom rituals. The aim was to ensure a prosperous year and get St. Brigid’s protection.

Wondering why she was so special? Let’s dig deeper into her story and how she became such an iconic figure in Irish Culture.

Who was St. Brigid?

St. Brigid is Ireland’s only female Patron Saint who is believed to be the only female bishop in Ireland’s early Christianity. This female saint of Ireland has the same name and qualities as an ancient Celtic Goddess. According to Celtic mythology, Brigid was the goddess of poetry, healing, fertility, protection, and the forge.

Soon on @RTERadio1 I report on St. Brigid’s Day & Imbolg and I talk to @SliAnChroi Karen Ward about #firstdayofspring … Tune in to @morningireland @rte between 8:30 to 9. pic.twitter.com/eIH5LSKUTE

Brigid was born in Dundalk around 450 AD and founded the first monastery in County Kildare, Ireland. Her father was a pagan Leinster chieftain, while her mother was a devout Christian. Saint Patrick encouraged her to learn more about Christianity and promote the gospel.

Young Brigid started life in slavery and was later sold back as a servant to her father. Her father was an affluent pagan, who had many possessions, but Brigid frequently shared his wealth with the poor. This saint of Ireland showed compassion, generosity, and holiness traits from a young age.

The Saint’s most well known miracle 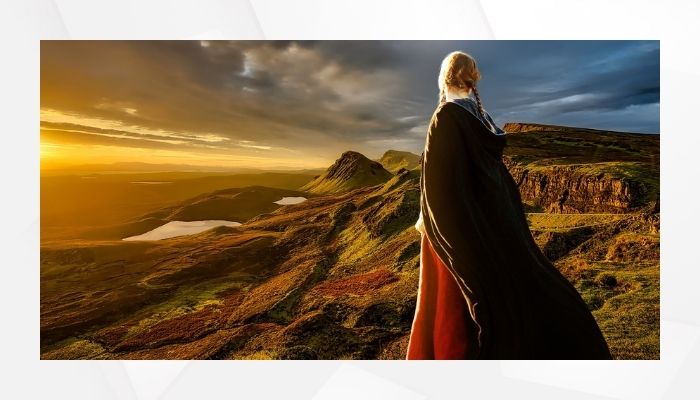 Saint Brigid rose to fame as a devout Christian and miracle worker. Her miracles turned many people to Christianity. The most well-known feat credited to her, and the one told most frequently on Lá Fhéile Bríd, is how she obtained the property on which she later built a convent.

According to Irish mythology, Saint Brigid approached King Leinster and requested property, claiming that the spot where she stood was ideal for a convent. She pleaded to God to soften the King’s heart, and God responded.

Brigid then requested that the King give her as much land as her cloak could cover. Amused by the idea, the King agreed. However, when Brigid’s four sisters opened the cloak, it swelled and spread in all directions, covering many acres of land. The King then came to trust in God’s might and converted to Christianity, giving Brigid enough land to build her convent.

The story behind Saint Brigids Cross 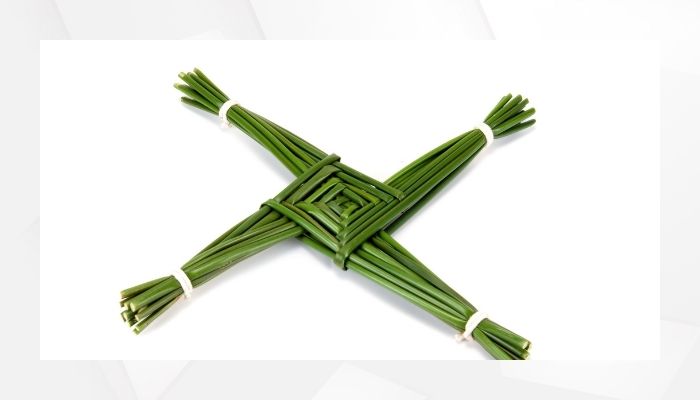 St. Brigid was born about 15 years before the somewhat official fall of the Roman Empire. As you can imagine, these were very dark times. For her, one particular night, this darkness included the impending death of a loved one that some believe to be her father.

Brigid told the man about her faith while weaved rushes together into a particular pattern. It later became known as St. Brigid’s Cross. By the rise of the morning, the man stood healed of his deliriums that he converted to the same faith that young Brigid described. And that is how the story of St. Brigid’s Cross began.

A traditional Brigid’s Cross has four arms knotted at each edge and a woven square at its center. Early Celtic history also suggests the existence of another version of the cross with three arms.

In Ireland, these crosses are commonly made on St Brigid’s day, and there are various rituals involved in their making. In the past, Irish families would place the crosses over doorways and windows to keep intruders out of the residence. Some families would also keep the cross of each year under the roof as a way to indicate the age of the house or how long a family lived there.

How to make your own cross?

St. Brigid’s crosses are unique because you can make your own every year using rushes, and the internet is full of instructions to guide you. Here is our favorite tutorial on how to weave one.

No time to make one?

Rushes are not easy to come by. And it’s not often that there is extra time for weaving. And so, inspired by the striking design of St. Brigid’s Cross is our own Sterling Silver St. Brigid Cross.

The center of the cross features a quartet of pleated 14-karat gold sections. Sterling silver haystacks, counter-textured in appearance and gathered at the ends, terminate each of the four points, giving the St. Brigid Cross its whirligig-like appearance of motion.

While evoking the form, observe that it is not an exact copy but rather a creative invocation of the symbol. This is just a friendly reminder in case you decide to utilize Shanore’s rendition of the St. Brigid Cross for something other than weaving your own: frightening vampires away.