One can often wonder about Ireland in the winter time. For instance, if someone wanted to travel to this great isle, would this be the time of year to do it or should that person wait?Well, suffice it to say, there should really be nothing stopping anyone from visiting Ireland in the wintertime for fear they might be missing out.

It is true that Ireland has had some rather mixed reviews in regards to snowfall which may be a reason why travelers acquiesce at the thought of going in the late and early months of the year. In fact, legendary accounts known as the Annals, which dated back for centuries have described the harsh winters experienced by the people of Ireland. The Annals began in the Dark Ages and this makes the recording of the climate and weather so important for many reasons. First, after the fall of Rome, many records did not remain and the Annals serve as quite unique just for their mere existence. Secondly, the placement of the republic puts Ireland in a specific spot that notating it’s temperatures and patterns was instrumental in identifying aspects of surrounding areas like the ocean and other countries relative to Ireland.

While they may not have been aware at the time, it seems those people recording in the Annals were forging an important aspect in history and helping to understand significant events of the past and how they relate to the present. How does this all translate to Ireland winters you might ask? This is because the writers made notice that the winters were extremely harsh and cold and this gave the impression that it was a place best to be avoided especially in the winter. This gave Ireland’s feel for travel and that it should be reserved for when it was warm and only then.

However, what scientists and others have discovered was that the extreme cold temperatures that were experienced by others in the history of Ireland were directly related to volcanic blasts and were not necessarily conducive with a perpetual state.

For those times spent indoors around a fire and for the outdoor moments spent looking at the sites, these earrings would make a perfect statement of your interest in all things Irish.
These sterling silver infinity-shaped earrings just shine and dazzle with their meaning of endlessness. They also have beautiful stones set inside them to catch a shimmer off of the sun or of a bright light. 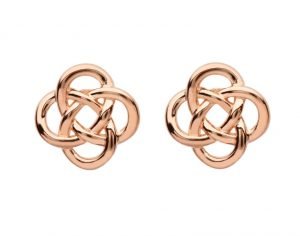 Those who reside in Ireland can attest that it does snow in the winter but just mildly for the most part. They would also say yes, it does get cold, but that those little things won’t cut away from someone’s enjoyment while visiting during the wintertime. In fact, the only real drawback is less hours of sunlight in the wintertime because of Ireland’s location geographically.

They do have an occasional snowstorm and this year is set to be one of the coldest in history. If you plan your itinerary right, you can spend a majority of your downtime indoors enjoying Irish culture around a warm fire and soaking up important sites with the limited sunshine you do have. With the lower number of tourists during the wintertime, traveling in the off season may be the best way to visit Ireland.