Across Ireland this week, children are making square crosses of rushes in honor of a saint who, despite starring in a wealth of legends and shattering the glass ceiling before churches had stained glass windows, consistently plays second fiddle to St. Patrick.  St. Brigid, the daughter of a Druid priest and a Christian slave, was believed to have been made a bishop at one point in her illustrious career.  Her distinctive cross is famous, and she is beloved for her charity and compassion… as well as her shrewd negotiation skills.  She was, in short, a formidable woman.  She lived in the 400s, but she is still an inspiring figure today.

St. Brigid knew how to get the upper hand in property transactions, although she didn’t do it for her own personal gain.  She needed land so she could build a monastery in County Kildare.  She found an ideal spot with everything the monastery would need and asked the King of Leinster for the land.  He refused.  But he didn’t realize who he was dealing with.  Brigid returned with four of her nuns and a plan.  She asked the king for as much land as her cloak would cover.  The king of course thought she was mad and agreed.  The four nuns each took a corner of the cloak and began to walk. And walk.  And walk.  As the king and his court watched in disbelief, the cloak grew and spread to cover the entire parcel of land that Brigid had initially requested.  Brigid 1, King 0.  He converted to Christianity after that and supported the monastery.  Apparently he learned not to mess with Brigid. 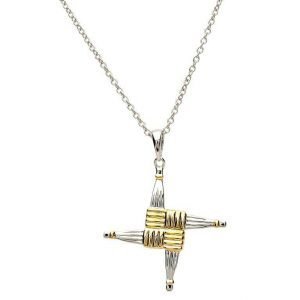 While Brigid was a strong and powerful leader, she was loved far and wide for her compassion and kindness.  Her many legends repeat the theme of her giving to the poor, often to the chagrin of the wealthy when she passed on gifts meant for her to others who needed them more.  She even gave away her father’s treasured sword.  The jewels on it would fetch a good sum of money, and so she gave it to a man who could not feed his family to sell.

Her monastery kept a large fire burning to represent Christ’s light, although sacred fires in Kildare pre-date Christianity.  Today, Kildare’s town square is home to a new perpetual flame in a beautiful sculpture.  Then-president Mary McAleese attended the initial lighting of the flame on St. Brigid’s Day in 2006.

St. Brigid’s feast day is February 1st, which is also Imbolc, the halfway point between the winter solstice and summer equinox.  Many women will don a piece of jewelry decorated with St. Brigid’s cross.  She will be feted by craft workshops in schools and museums around Ireland.  Last year’s rushes St. Brigid’s cross will be replaced with a fresh one in many homes as we all breathe a sigh of relief at the lengthening days.