If you celebrate your birthday in August, you share a birthstone with one of Ireland’s most famous women. Maureen FitzSimons from the Ranelagh area in Dublin was a gifted athlete, marvelous singer, talented actress and stunning beauty born on August 17, 1920. That name might not ring a bell because she became one of the most famous women in Hollywood under her stage name Maureen O’Hara.

Her mother was a well-known contralto opera singer, while her father was involved with the Shamrock Rovers soccer team. Maureen was the second of six children. She described her family as “remarkable and eccentric”. Two of her sisters also became actresses and starred in British films. Five of the Fitzsimons children trained at the illustrious Abbey Theatre as teens. (The eldest became a nun.) Although she initially hoped to be an opera singer like her mother, FitzSimons was soon discovered by an English actor Charles Laughton. He convinced Alfred Hitchcock to give her a chance, and they co-starred in Jamaica Inn, which was released in 1939.

Starting a Hollywood career young with a big hit can sometimes lead to disaster, but in Maureen’s case it led to more successful films. She starred as Emerelda in the Hunchback of Notre Dame, also released in 1939. Then she went on to establish herself as a screen star with roles in classics including How Green Was My Valley, Miracle on 34th Street and of course The Quiet Man. She co-starred in five films with John Wayne. Although they played romantic couples on the big screen, in real life they were close friends. The Academy honoured her with a Lifetime Achievement award at the 2014 Oscars. 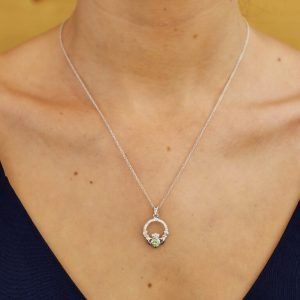 Her athleticism served her well in Hollywood. Maureen did most of her own stunts, which was extremely rare at the time. She always saw herself as a tough, spirited Irishwoman, different from other Hollywood starlets. And she was one of the first women in Hollywood to speak out against rampant sexual harassment and the casting couch culture. But she was very young when she began starring in movies, just a teenager. And that led to some disastrous marriages.

Maureen met her first husband while filming Jamaica Inn. George Brown was a production man seven years her senior. She rejected his first proposal, but then he surprised her by including a minister on what she thought was the last time she would see him before she left for the USA. She married him because she was afraid if she didn’t she would miss the ship’s departure and only told her mother once they were at sea. She never saw Brown again, and the marriage was quietly annulled. Her second marriage, to screenwriter Will Price, was an even worse disaster as he was an alcoholic. She was only 20 when they married, and he was the father of her only child, her daughter Bronwyn.  Maureen became so frightened of her second husband that in her memoire,  she recounted sleeping with a baseball bat next to her bed. They divorced after 12 years.

They say the third time is the charm, and Maureen’s third marriage was very happy. She married Brigadier General Charles Blair in 1968 after he retired from his career as a commercial pilot. They had a very happy decade together before he was killed in a plane crash. Although he’d retired, the couple set up their own local airlines in the Virgin Islands. On a flight between St. Croix and St. Thomas, an engine failed and the plane crashed killing Blair and three passengers.

Maureen remained in the Virgin Islands for some years, occasionally doing film work in Hollywood. In 2005, she returned to Ireland and settled in Glengarriff in West Cork. Ten years later at age 95, she died surrounded by her loved ones. She was buried in Arlington Cemetery with Charlie Blair. A bronze statue is expected to be unveiled in Glengarriff later this year.